After a case is resolved, the user can reactivate the case but what happens to the SLA when this occurs? In some scenarios you might want to restart the SLA timer while in other cases you’d want to SLA the remain unchanged. This posts explores a bit both possibilities. Note that this post was tested with CRM 2015 and enhanced SLAs.

One of my recent requirements was that whenever a case is reopened, the applicable SLA would need to restart counting again as if it were a new case that just got created. This lead me to explore what kind of control we have on SLAs when a resolved/cancelled case is brought back to in progress.

In my first attempt, I had created an enhanced SLA for which the “Applicable From” field was the CreatedOn field, meaning that the “start” of the SLA timer is the creation date of the case: 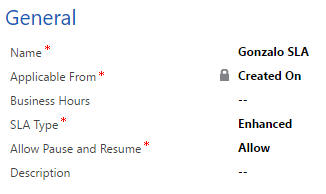 In my test SLA I give the users 5 minutes to resolve the case before the SLA is considered as “failed”. Then I created a case and resolved it after 1 minute which causes the case to succeed the SLA. I can see in the associated SLA KPI instance that everything looks as expected:

Note: The SLA KPI Instance is the entity in CRM that holds the information about the SLA of a given case, there is one SLA KPI instance per case that has an SLA.
Now I reactivate the case and notice that although the case is now active, the SLA KPI instance has not changed, so the case is considered to have succeeded the KPI even though it is still active (there is no timer anymore):

I can edit anything in the case and resolve it again and no change is logged to the original KPI instance and there will be no new KPI instance either. Even if I leave the case open for months before resolving it, this case is always considered to have met the KPI. Whether this behavior is expected or not is debatable because in some other scenarios you might have a manager re-open a case just to enter som additional information before closing it again and you might not want to lose the original SLA KPI instance information in that case. However, in my requirement, the SLA timer should start again, so what can we do?

It will not be possible to generate a new SLA KPI instance when a case is reactivated because this feature is not flexible to do so in CRM. However, we can trick to overwrite the existing SLA KPI instance and update it as though it were a new case when the case is reactivated. However, you will lose the historic SLA instance information from the first time that the case was resolved.

To do so, the first thing you need to do is base your SLA on some other field that is not the “Created On” date. I believe it is a good practice to create a custom DateTime field in the case from which you always base your SLAs so this way you can implement any business logic to set the value of that field depending on many conditions (something you cannot do with the CreatedOn field which is read-only and will never change). So I created a new SLA based on my custom field: 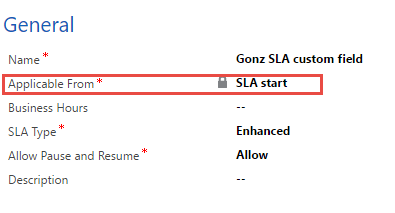 Now I can set a simple business rule to populate the “SLA start” field with the value of “Created On” whenever a new case is created. Thus far, my SLA will behave the same as it did when I had it defined based on “Created On”. The only difference now is that I will also create a workflow which will update the SLA start field when the case is reopened and will set the value to “Execution Time” (time the case is reactivated).

When I repeat the same example as before, I notice that once I reactivate the case, the old SLA KPI instance information is lost and the entire SLA is recalculated and updated; this happens because a change occurs in the field on which the SLA is based (SLA start) which forces everything to re-calculate. So I achieve my requirement of restarting the SLA timer when the case is reopened. However, I would have much rather liked CRM to generate a new instance of an SLA KPI each time I reactivate the case so this way I can track the SLA timer after reopening the case but at the same time I do not lose the old KPI information which can be useful for reporting. I haven’t found a way to do so, but I would be happy to hear if anyone has solved this problem.

There I however, a big caveat with this approach and that is that because the “old” SLA KPI information is lost when reactivating the case then users can “cheat” by simply reactivating and re-resolving cases for which they did not meet the KPI and all of the sudden their KPIs look like they never missed any SLA!

If you don’t want your SLA timer to restart when a case is re-activated you just need to make sure that the “Applicable From” field that you use in your SLA definition will never change when a case is reopened (as is the case with the “Created On” field).